Doodling in My Bible

When I was a student, the church I belonged to regularly organised missions to towns across the south of England. The aim was to share the Christian good news with those who hadn’t heard it. In my second year as an undergraduate, I offered to join such a mission team. As a result, I found myself talking to a young man who had just come to faith. It was a really exciting conversation, but I really wasn’t all sure what to say. So, I asked the vicar. “Show him some of God’s great promises in the Bible,” he told me. That sounded like a great idea. But, what were these great promises? Suddenly my mind went a complete blank.

I hope that I did manage to offer some encouraging words. But I came away realising how little I knew about what was really in the Bible – and even less about where to find those encouraging passages in Scripture. So, I bought myself a brand new copy of the Bible – one with nice wide margins – and started to read some of it each day. But I didn’t just read it; I kept a pen and some coloured pencils next to me. Every time I reached one of the Bible’s great promises, I drew a little rainbow in the margin next to it. The rainbow seemed like an appropriate symbol as it reminded me of God’s promise to Noah after the flood. It wasn’t just rainbows I drew, though. I devised other symbols to represent God’s love, Christ’s death, the Holy Spirit, creation, sin, water, new life and so on. Each time I found a verse that mentioned one of these things, I’d draw the appropriate image next to it. 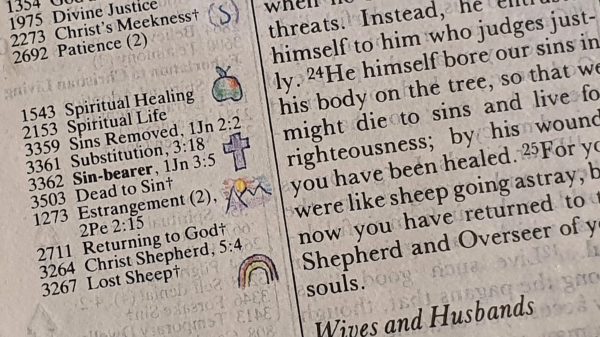 Of all the things I’ve ever done, this has probably been the one that has most helped me to grow as a Christian. First, drawing these symbols made me really concentrate on what I was reading as I asked myself: “What themes are being addressed here?” Second, my pictograms enabled me to find Bible passages much more easily and quickly as my eye scanned for the relevant image. Finally, marking my Bible in this way inspired me, over several years, to read it right the way through. As more and more of my Bible was adorned with imagery, I was increasingly inspired to make sure all the pages were marked.

Maybe the idea of colouring your Bible wouldn’t be your thing. But it is important for each of us to find ways of both going deeper into God, and growing in our understanding of our faith. As Saint Ignatius said: “Use what helps and avoid what hinders.” My prayer is that each one of us might find our own way to grow in our Christian faith. 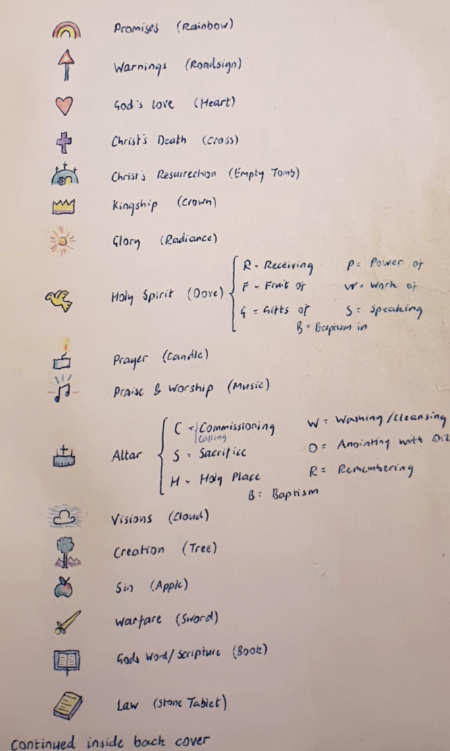