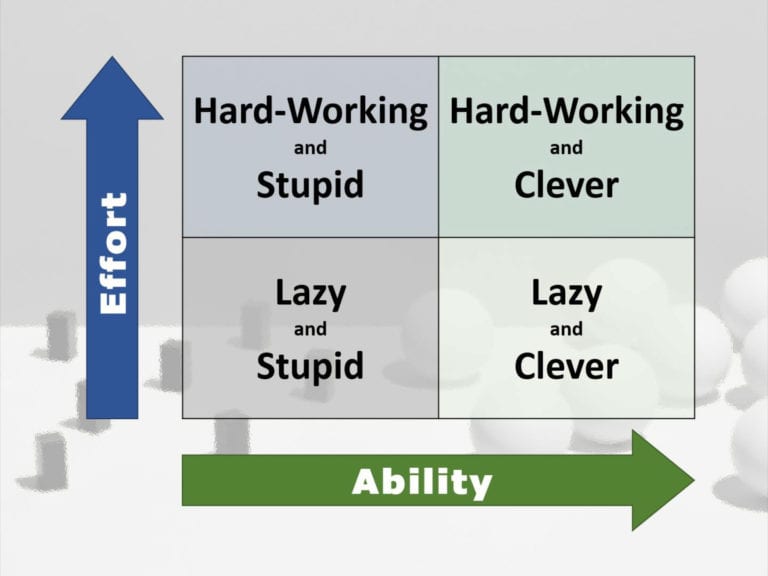 Each person is unique, and so every attempt to put people into categories is bound to fail. This is especially true of 2-by-2 grids which end up caricaturing people. Having said that, I find this particular grid really rather insightful.

It divides people according to their ability and the amount of effort they put in. The question is then: Which of these people would you want on your team?

Obviously, you don’t want people who are lazy and stupid. You might have them on your team as an act of charitable kindness. But they’re not going to contribute anything.

People who are hard-working and stupid are the dangerous ones. They put a lot of effort into doing things that are unhelpful and unproductive – or worse, counterproductive. Ideally they should be allocated roles where they can cause the least harm.

The people who, at first sight, seem the most attractive are the hard-working and clever individuals. These are the people who will get useful things done. The problem is that because they’re so diligent, they believe they can do all the work to themselves. This is compounded by their intelligence. They assume that no-one else can do things to their standard, so they are unwilling to delegate. The upshot is that they burn themselves out while everyone else sits around idly doing very little.

The best team leaders are those who are lazy and clever. Because they are clever, they know exactly what needs to be done. As a result of their laziness, they delegate the work to the rest of the team. Here their intelligence kicks in again, giving them the ability to empower others effectively.

Of course, this is all a huge, sweeping generalisation. However, it does prompt me to try to be a bit smarter in the way I work … and probably somewhat lazier, too!