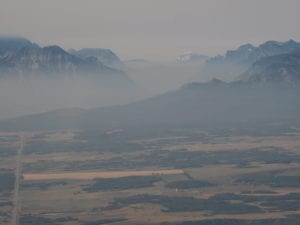 The day started off in a slightly inauspicious way. First of all, I spilled my coffee at breakfast. Then the taxi driver couldn’t find where I lived. Finally, the earlier train was cancelled. However, at 9.03 am I was safely on the train to Gatwick. The journey went very smoothly, and I arrived at the South Terminal with no difficulties. A shuttle whisked me easily to the North Terminal where I checked in my suitcase, went through security and then had an iced mocha at Starbucks. As soon as that was finished, the gate for my flight was already being announced, so I made my way (again quickly and easily) to Gate 49. I sat and read a complimentary copy of The Times before I was able to board. Having paid a bit extra for economy “plus” I was one of the first to board. My seat was large and comfortable, and I was offered free orange juice or champagne. I chose the former. I had a window seat with a good view. On my left was a man of about 30 who spent the entire flight playing games on his laptop.

The flight was also easy and quick. Indeed, we arrived half an hour earlier than planned. Even so, the nine-hour flight did seem quite long. However, I passed the time reading two books (Talk like TED and The Imitation of Christ), doing super fiendish Sudoku, looking out of the window and having three or four short naps. We were well looked after. Lunch consisted of a bean salad followed by beef with vegetables in a cheese sauce. Later on, in the flight we were served a cream tea.

We landed in Calgary at about 3.00 pm local time. Disembarking was also effortless. However, there was then a hugely long wait to go through passport control. Only one kiosk was open to overseas visitors – at least until all the Canadian and USA passengers had been processed. I then picked up my suitcase and went out to meet my driver.

The plan was that I was going to help out in the local parish of Fort McLeod while their parish priest, Pilar, was away. However, unfortunately she was unwell, so she’d arranged for me to be collected by a man in his mid 70s called Vern. He was friendly and nice, and told me a lot about Canada, for example pointing out some of the little oil wells that dot the countryside in this part of Alberta. There was a mistiness over a lot of the scenery and Vern explained that this was actually smoke from the forest fires that they’d been having in British Columbia for about three weeks. Among the things that struck me on the journey were the number of pickup trucks that people drive, the huge lorries pulling two, or occasionally three, trailers (making the whole thing nearly 100 feet long) and the emptiness of the roads.

We arrived in Fort McLeod at 6.00 pm and I was welcomed into Dee’s home where I was to be staying. It was one of the oldest in Fort McLeod, being over 100 years old. It was spacious and pleasant and furnished as if it were from the 1950s. Dee was a lady in her late 60s and was sparky with a “mind like a hummingbird” that seemed to flit from thing to thing. She trained as a teacher but never actually worked full time. Rather she spent her entire career as a supply teacher going into lots of different schools. She told me in detail about the history of her family (going back to the cup bearer of William the Conqueror!) and the history of Fort McLeod.

It wasn’t clear whether I was going to get a meal, so I finally broached the topic – my “lunch” having been 8.00 am, Calgary time. Food wasn’t a problem, and within a few minutes Dee has rustled up pancakes with Saskatoon berries (a kind I’d never heard of), bacon and maple syrup. We sat and continued to chat until about 8.30 pm when I went up to bed. Actually, I didn’t just have a bedroom. The whole of the first floor was going to be mine during the visit: a bedroom with a homemade quilt on the bed and flowery wallpaper, a bathroom with an adjoining shower room and a sitting room full of books and copies of National Geographic “going back to 1936”. I unpacked and went to bed. It was now 3.30 am, UK time. 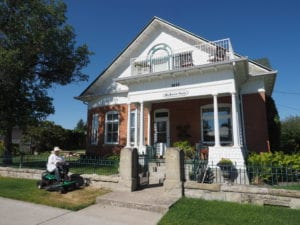