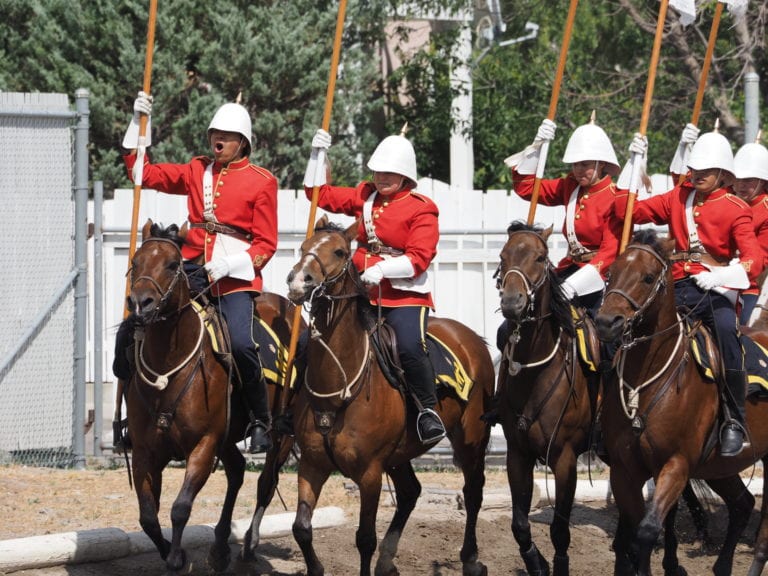 My might was fairly eventful. I woke up at what would have been 9.00 am UK time – 2.00 am in Fort Mcleod – to the sound of a hootin’ and a tootin’ of a goods train passing only a couple of hundred yards from the house. Apparently it goes across three level crossings and has to sound its whistle three times for each crossing. There then followed great rumbling and grinding sounds as (again, apparently) around 100 trucks trundled by. After that I stayed awake for quite a while with it being morning time in the UK. Finally, however, I got back to sleep and was woken by my alarm just before 6.00 am.

I got myself ready and came downstairs where I was surprised to find Dee already up and breakfast on the go. Breakfast (which I ate, while Dee only had coffee) consisted of a huge bowl of fruit including cherries and a wide selection of different berries, followed by four (!) sausages, a mixture of fried mushrooms, onions and tomatoes, and toast made from Dee’s homemade bread. It was all delicious. Over breakfast, Dee continued to talk away about a thousand different topics such as her belief that dragons must once have been real, considering how widespread they are in world culture. After breakfast I returned upstairs for my morning prayers and reading, and then came down to sit at the dining table to write the first instalment of this journal.

Around 9.30 am Sabastian – “Dr David” to Dee – arrived. He was going to be responsible for showing me around Fort Mcleod. Sabastian had attended Winchester School and then studied medicine at Cambridge. He came to Fort Mcleod in the mid 1970s to be both the GP and to do general surgery. He took me into the little wooden Anglican Church and then down the historic main street, which has been used as a set for a number of films including Broke Back Mountain. Fort Mcleod has a population of about 3,200 but covers a surprisingly large area. Roads are completely straight and enormously wide, and run either north-south or east-west. Houses are all detached and each has a good amount of land around it. The town is pretty much self-sufficient and has several banks, three Chinese restaurants (I was told), lots of shops, lots of churches of various denominations, and even a little theatre: The Empress Theatre. (Spelling often, but not always, follows the English rather than the American.) We stopped for a tasty cappuccino at one of the local cafes: Cafe Orange. After that we went back to Sabastian’s car and he drove me around the outskirts of the town. All the time we were going round, Sabastian was telling me interesting things about Canada, its history, its peoples, the churches and his own family.

As the morning moved on towards lunch we drove back to Sabastian’s home for lunch. There I met his wife Eva, for whom Sebastian cares most devotedly. It was a remarkable demonstration of the marriage vow: “in sickness and in health”.

We met each had a beer and then the three of us enjoyed lunch that Sabastian had prepared. This consisted to spinach samosas, bread, cheese and pâté, followed by strawberries and cream. I heard more about their family and about Sabastian’s role as a lay preacher and his interest in wild flowers. After lunch, I was taken out to see their huge “trailer” – a vast and luxurious caravan with extending sides and every amenity you could imagine.

After that I didn’t stay long as I was due to meet Pilar at the Fort (more of which shortly). Pilar, the incumbent of Fort Mcleod was originally supposed to be collecting me from the airport, but a sickness bug had prevented her. So we drove to the Fort and, after a short wait, Pilar arrived with her family: her husband, Brent, (who is very tall), their son, Andreas, and daughter Michaela. It was difficult to age their children exactly, but I would have put them in their mid-teens. There were lots of smiles and welcomes and then I was expecting that we’d all go in to the Fort, but instead Sabastian went off home and Pilar and her family went off to continue their holiday, so I was left to go in on my own – which, actually, I didn’t mind too much. 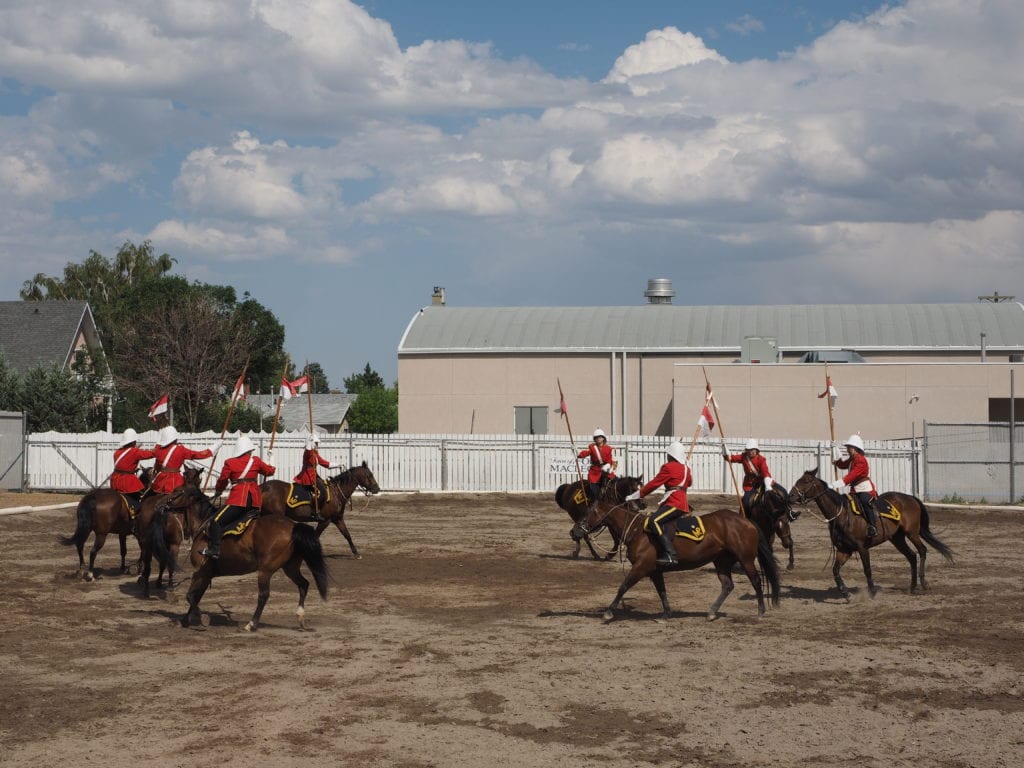 The Fort was a reconstruction of the original fort after which Fort Mcleod is named. The “Mcleod” comes from a colonel of the same name who was the town’s founder. It was founded in the 1880s as a base for the mounted police who wanted to bring law and order to this part of Canada and to stop the Americans trading whiskey with the indigenous peoples. Inside there were displays of historic artefacts and reconstructed interiors. The strange thing was that although this was little more than a century ago, everything felt very alien and different from today’s world. One example was the photographs of the “Indians” living their very primitive lives.

(At this point, it’s worth noting that the “Indians” don’t like that term. They have been referred to in various ways: “natives”, “First Peoples” and “aboriginals”. When I was there, the politically correct term was “indigenous people”, but I was told that they might decide to change their preferred terminology at any time.)

At 3.30 pm the visitors to the Fort, of whom there were probably about two dozen, all gathered outside for the “Musical Ride”. In the early days of the Mounted Police, in order to train the new recruits in horsemanship, they learned to ride in formation to music. Today this is acted out by local teenagers, dressed as Mounties, on horseback. We were introduced to horses and their riders, and were able to go up an pet the horses and speak to the riders. I spoke to a girl who was riding “NJ”. I asked about the origin of that name, as it seemed unusual for a horse. She explained that when the horse called “Jack” died, he was replaced by one which they called “New Jack”, now abbreviated to “NJ”. Having met the performers, we then watched them perform various manoeuvres which, while not terribly complicated, they did with great precision (as far as I could tell) and enjoyment. It was a good opportunity for me to take some photos.

In all I spent just over two hours at the Fort before walking back to Dee’s. (Because of the way the road are laid out in a grid, this was very easy to find.) Dee, once again, chatted on about all kinds of topics including whether time really exists or whether it’s just an illusion. She prepared supper of chicken and rice with salad and kohlrabi (a kind of vegetable a bit like turnip). Despite Dee describing it as “plain” it was all actually rather tasty. There was no pudding, though, so Dee suggested that we go to “Timmy’s”. I asked what that was and she explained it was a Canadian fast food chain that specialised in doughnuts, called Tim Horton’s. “If you’ve not been to Timmy’s, you’ve not really been to Canada.” So we drove off in her car to the unprepossessing-looking building on the outskirts of the town, next to the police headquarters. (“The police all love Timmy’s.”) There she had a doughnut with chocolate and I had one with honey, and also a coffee. Dee didn’t drink anything.

At that point I’d expected that we might just go back to Dee’s house, but instead she said she’s show me more of the town, so we drove off to the local cemetery. There we looked at the graves and especially the area set aside for members of the Mounted Police. There was a display board recounting the tales of some of their adventures and how they’d lost their lives in the line of duty. Again it was strange that stories from the 1920s came across as being more like ancient history. Graves weren’t the only thing we saw at the cemetery. We also saw quite a number of little gophers popping out of their holes to enjoy the evening sunshine.

A further circuitous tour of the town took us back to Dee’s. It was now coming up to 9.00 pm and so I decided that it was time to go up to bed. It had been a full and fascinating day.