Are you a Multiplier or a Diminisher? 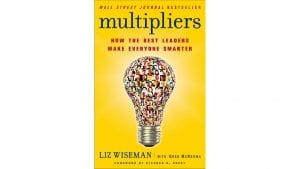 Over the years I’ve read lots of books about leadership. I also used to be involved in training clergy in leadership through the Chelmsford diocesan Clergy Leadership Programme. So, I don’t expect to come across books which radically change my view about how leaders should be working. Recently, though, I read Liz Wiseman’s book Multipliers, which I found completely eye-opening.

Liz’s book, which is subtitled how the best leaders make everyone smarter, describes two kinds of leaders.

First there are Multipliers. These are the leaders who do indeed make other people smarter. They get the best out of their teams. They create an environment where everyone is using their gifts and talents to the full. As a result, people feel valued. Their contributions are recognised and appreciated.

Then there are the Diminishers. These are the leaders who drain the competence and energy from those around them. They sap the intelligence and ideas from their teams. The environment they unwittingly build is thoroughly demotivating. People don’t simply feel undervalued, they stop even bothering to contribute at all. What’s the point if their input isn’t wanted or needed?

So, who are the Multipliers? They’re the smart, intelligent leaders? Right? … Wrong! No; it’s actually the brightest, most charismatic, most able leaders who are likely to have a diminishing effect.

Bright leaders – the Diminishers – are sure of their own genius. They know that their ideas are the best. They believe there really isn’t much point listening to other people’s ideas. After all, nobody else’s insights will be as good as their own. So, they end up squashing their team’s inventiveness. Why share your suggestions if it won’t get listened to? Multipliers, on the other hand, encourage other people to think for themselves and to come up with proposals. As a result, everyone becomes more creative and innovative.

Charismatic leaders become Diminishers through exuding confidence and personality. They are the ones who are first to offer a view or opinion. In a meeting, they are likely to be the person who does most of the talking. The trouble is that the more the diminisher is “on”, the more everyone else switches “off”. In contrast, Multipliers are usually the quiet listeners who are keen to hear what other people have to say. Instead of giving answers, Multipliers are much more likely to ask insightful questions.

Able leaders also become Diminishers when they become rescuers. They hate to see people struggle, or make mistakes, or fail. So, out of noble motives, they step in to save the floundering team member. After all, they don’t want anyone to mess up. The problem is that they starve others of valuable opportunities to learn from their mistakes. Of course, Multipliers may also step in to help. But Multipliers are much more tolerant of blunders and slip ups, seeing them as opportunities.

I said that the book Multipliers was eye opening. This isn’t just because Liz Wiseman’s concepts are interesting and novel. The book also made me recognise how often I have been a Diminisher myself. Often I’ve been the first one to offer the ideas and the opinions, and who has rushed in to help. No wonder, the people I’ve worked with have sometimes (I think!) found me exasperating.

I wonder, though, whether this is purely my own failing, or whether Diminishers are not uncommon among clergy. After all, clergy are the ones with the theological training. They’re the ones with the confidence to speak out – something preaching develops, I’m sure. And many clergy are natural and compassionate rescuers.

Maybe I’m wrong. Perhaps I’m being unfair on my clergy colleagues. There are some wonderful Multipliers among the ranks of the Church. I remember one former colleague, in particular, who encouraged me. However, it is interesting just how often I’ve heard lay people talk about feeling undervalued in their local churches.

So, my hope is that Multipliers will become a book that’s read and referred to by many in ministry. And even if it’s not read, perhaps the language of “Multipliers” and “Diminishers” should become common terminology. That way we can, from time to time, ask ourselves: “Am I being a Multiplier or a Diminisher?”

Multipliers by Liz Wiseman is published by Harper Collins and can be order online here.