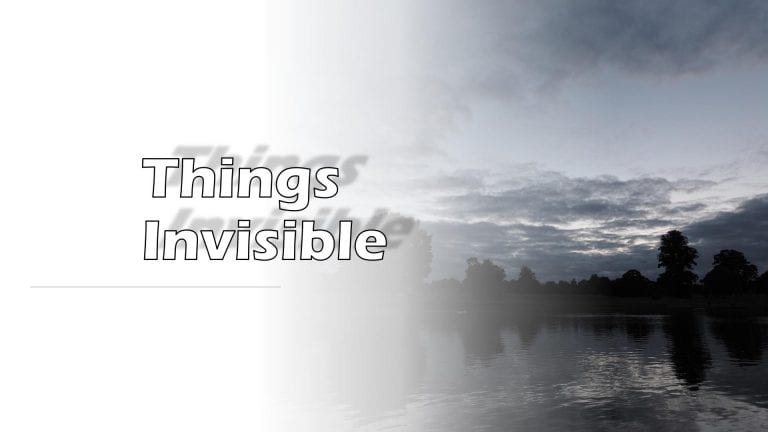 The Nicene Creed is a statement of the Church’s beliefs. Right at the beginning, we say that God was the maker of “all things visible and invisible”. As a child, I often wondered what these invisible things were. If we couldn’t see them, how did we even know they were there? As an adult, I’ve met people who’re sceptical about Christian faith. “How can you believe in a God you cannot see?”

So, I’ve been thinking about “invisible” things, and I’ve come up with at least six different varieties.

First, there are things that physically exist, but which we can’t see due to our limited human vision. We certainly know these things are there, though. They can be observed in other ways, often with the right scientific equipment. Examples include magnetism, radio waves, and electrons.

Next, there are things that (probably) physically exist but which we have no way of observing (at the moment). These are theoretical. In this case, I think of superstrings, dark matter, and dark energy.

Third, are those things that may exist in a very physical way, but which we simply haven’t discovered (yet). The most obvious example here is alien life elsewhere in the universe. Not only can we not see this life now, it may be that it will forever be beyond our powers of observation.

Then, there are things which everyone agrees exist, and which can be perceived, but not in a visible way. An example would be the Beethoven’s Fifth Symphony. This can be written as notes on a page, recorded as bits in a compute chip, heard as vibrations in the air, or imagined in my mind. We can experience the music, but it it’s quite invisible.

Finally, that brings us to God and the “spiritual” realm. If radio waves, Beethoven’s Fifth Symphony, and justice all exist, then why not other invisible things such as God? Of course, the cynic might say that God is about as likely as a little green alien. That may or may not be true. But we can’t deny the existence of God simply because God is invisible.

PrevOlderAre you a Multiplier or a Diminisher?
NewerA Fresh Vision of Good NewsNext